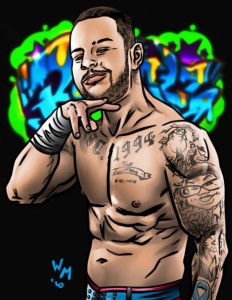 The final name for our 3rd quarter Indies Prime release is yet another wrestler getting his first card but has an existing partner currently in Filsinger Games, and that is Trey Miguel.  Although it may be incorrect to say that Trey has a regular partner when he in fact has two.  Trey Miguel completes the trio of the Rascalz alongside Desmond Xavier and Zachary Wentz (who both first appeared in CZW Set 4).  While he has been known to regularly tag with the other Rascalz, more recently Miguel has achieved a level of notoriety in the singles ranks, competing in many high-profile championship matches on National Television.  His impressive arsenal of aerial moves has earned him a number of monikers including “The Fresh Prince of Mid-Air” and the “Powerslide Prince”.  Although he has over a decade of experience, Miguel is only 26 years old, so the future is full of possibilities for this Ohio native.

Trey Miguel joins Kevin Ku and Tre’ LaMar in the 3rd quarter release for Indies Prime.  Subscribe to any Promoter Prime set and receive all currently released cards and you will have future releases sent to you as they become available.  You can subscribe to Promoter Prime HERE.  Q3 cards will be sent along with our Fall releases on September 30th.  To check out all the fall releases, including Best of the Indies Tag Teams 2020 go HERE.