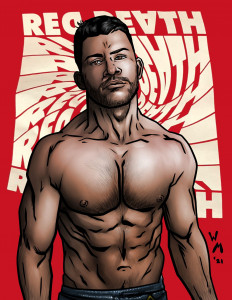 The current C4 Champion, Daniel Garcia, is the next name in the IWTV Indies expansion! A true student of the game and believer that hard work will pay off, Garcia also brings a liberal dose of bad attitude to the ring. Red Death has made it clear that he will not rest until he is the best wrestler in the world. At his age with his determination and already substantial skillset… He just might make good on that desire – sooner rather than later.

Daniel Garcia joins Myron Reed, Jake Something, Christian Casanova, Joshua Bishop, Gary Jay, AC Mack, and 1 other wrestler in the IWTV Expansion pack.  The IWTV Indies Expansion is available for pre-order now along with War Games 2091 and Legends Expansion VII. You can preorder everything HERE.