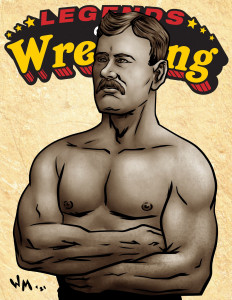 Evan Lewis is the next pioneer added to Legends Expansion VII. The original holder of the “Strangler” moniker, Lewis was the first to perfect the stranglehold modernly known as the sleeper. He is also recognized as the first American Heavyweight Champion. Lewis was known as a brutal competitor and engaged in multiple bone-breaking, bloody bouts toppling opponent after opponent and laying claim to one of his time’s best wrestlers.

A true pioneer of professional wrestling, Evan “Strangler” Lewis joins Frank Gotch, George Hackenschmidt, the Great Gama, Terrible Turk, and more in the Legends Expansion VII set. Promoters will not want to miss out on this legendary roster of talent. Pre-order now, along with the IWTV Indies Expansion and War Games 2091. You can order HERE.