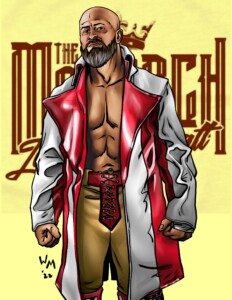 Jeremy Wyatt is coming to Indies Prime! A 20-year pro, Wyatt brings experience, intensity, and a level of determination that are nearly unmatched when stepping into the squared circle. A fixture on the Midwest indie scene, Wyatt has collected belts in multiple promotions and never backs down from a fight. Notable opponents include Fred Yehi and Gary Jay – both of whom he’s gone the distance with in 60-minute matches. Wyatt has proven time and again that he’s one of the best wrestlers on the scene – not just in the Midwest, but anywhere he goes. This Kansas City native is not just another name to add to your roster – he’s the Monarch of professional wrestling and his opponents are one CORONATION PILEDRIVER away from becoming another victim at his feet.

Promoter Prime 2022 is available now! Plus, Women of the Indies 2022  along with War Games 2093 Reimagined and the Brian Blair CAC Special Edition card can all be preordered HERE.  Games will ship by early October.  Promoter Prime subscribers, please note that Promoter Prime will be shipping separately from your other preorder items.