The Turkish Invasion Is Here! 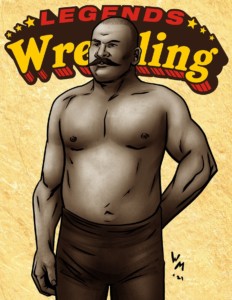 Yusuf Ismail stood 6’2″ and weighed in at over 250 lbs at a time when most wrestlers barely broke 6 foot and weighed under 200 pounds. To say his strength and size were intimidating would be an understatement. His mere presence caused crowds and wrestler’s alike to cower in fear. In one instance, a wrestler wouldn’t even dare to enter the ring with him. Ismail tossed the opponent to the auditorium floor, and the crowd called for the Turk’s death… Though none would dare come at him.

In his greatest success, The Turk bested Evan “Strangler” Lewis for the American Heavyweight Championship in Chicago. Tragically, Ismail’s life was cut short due to a disaster at sea. Legends of Wrestling promoters can pit the Terrible Turk against all comers and see how his legend might have grown had the Turkish Invasion continued.

Will Ismail’s awesome strength clash with fellow European legend, Hackenschmidt? What about a challenge against Lou Thesz or Harley Race? Can you imagine the destruction a war between Ismail and Vader might bring? When The Terrible Turk comes to Legends Expansion VII, you’ll be able to answer those questions and more!