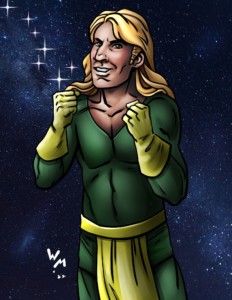 War Games 2092 brought a number of firsts to the Champions of the Galaxy game, including the first ever GWF enhancement wrestler Ursa Major.  Can the wrestler representing the Ursa Major system pull off an upset on one of the GWF’s established stars or will he just pad their win-loss record?