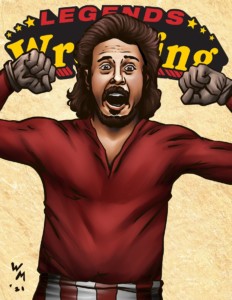 Few names could rival Jimmy Hart’s for importance to the Memphis territory. His near 7-year stint in the area saw him dominate the airwaves with more screen time than nearly anyone except maybe Lance Russell. His “First Family” challenged the top dog of the promotion – a revolving door of talent was immediately shot to the top of the card due to the heat magnet that was Jimmy Hart. But, on more than one occasion, Hart himself would have to step through the ropes and get his comeuppance at the hands of the Memphis heroes. This card represents “the Wimp’s” encounters within the squared circle. Will he be the punching bag as your territory’s hero gets their ultimate revenge? Or will his underhanded tactics and Family save him from embarrassment to bring the heroes down? Roll those dice and find out promoters!