Tragos and Thesz Hall of Fame Set 3 Kicks Off with the World’s Most Dangerous Man! 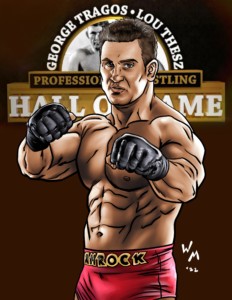 Ken Shamrock was one of the true pioneers of mixed martial arts (MMA). At his peak, there was arguably nobody better on the planet, and he became known as “The World’s Most Dangerous Man”. It was a moniker which was well deserved. There were few any better than Shamrock. And, like many other mixed martial artists he tried his hand at professional wrestling, but most have not experienced the success he did in the squared circle.  He would compete for the premier wrestling promotion of the world and would win his fair share of championship gold. Shamrock would later briefly hold a version of the World Title a few years later. He had conquered two worlds of combat sports, a rare feat, and his name would forever be known with fans of both sports.

Ken Shamrock won the George Tragos award in 2021, and fans will no doubt want to recreate his classic rivalry with fellow Tragos award winner Dan Severn.  Or perhaps you will want to match Shamrock up with Kurt Angle to see who has the best Ankle Lock.  The possibilities are endless.  Ken Shamrock is part of the 8 card George Tragos/Lou Thesz Professional Wrestling Hall of Fame game edition debuting in July 16th at GalactiCon in Chicago and July 22nd in Waterloo, Iowa.