Best of the Indies 2020 Rules with the Addition of Warhorse! 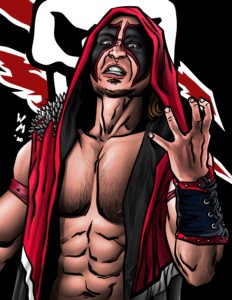 What better way to kick off the lineup announcements for our Best of the Indies 2020 game edition than with the Independent Wrestling champion himself Warhorse!  This midwest standout started his career as part of the Viking War Party faction before breaking out on his own.  Now with a new darker attitude and look and plenty of face paint Warhorse has stepped up his game to be one of the best performers on the Indie scene today.  Known for his unique third-person promos featuring loud music and lots of screaming, fans have flocked to support Warhorse.  He defeated Erick Stevens in September 2019 to win the IWTV Independent Wrestling championship and has gone on defend the championship a record 37 times!  There is no telling how long his title reign will last, because as Warhorse will tell you himself, WARHORSE RULES ASS!

The Best of the Indies 2020 game pack will feature 8 brand new wrestlers to Filsinger Games and will be released in late May.  Stay tuned each Wednesday for more announcements!