Are you ready for the Hot Seat? 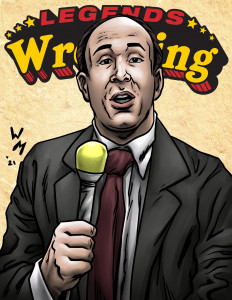 A National Wrestling Hall of Fame inductee in 2012, Bill Apter is an immeasurably important figure in the history of professional wrestling. There’s a good chance that a little 1/2 page ad in one of his magazines is responsible for many, many Filsinger Games fans. But his influence goes beyond photos and magazines; Apter has conducted his share of interviews through the years. Sitting in Apter’s Hot Seat has given wrestlers the chance to receive awards, smash awards, further feuds, and talk up their achievements. And now, Bill Apter joins the Legends of Wrestling color line with his addition to the Ringside Personnel 4-pack!

Promoters can add Apter’s interview card to their promotion when the 4-pack drops in late May. Preorders will be live beginning 5/7 for both the Ringside Personnel pack and the Best of the Indies 2021 Expansion!