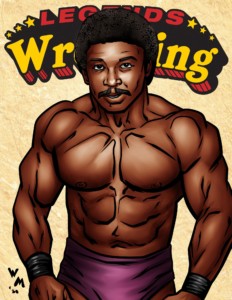 One of the biggest names of the Memphis territory’s latter days, Brickhouse Brown burst on the scene in the late 80s and immediately took the title off the most legendary figure of the territory. He embroiled himself in headline feuds during his time there and found himself at the center of multiple controversial angles. Brown was adept at working the crowd and could gain their ire or admiration in equal measure with his passionate promos and fiery style. Brown spent quite a bit of time in Texas and earned his share of top titles wherever he went. As a nice connection to the recently released 4-pack, Brown spent about a year in Portland plying his trade in the Pacific Northwest.

Sadly, Brown passed away July 29, 2018, from pancreatic cancer. An incredible talent and entertaining personality – just check out one of his shoot interviews – Brickhouse Brown deservedly takes his place amongst the Legends of Wrestling.