Pride of the Carolinas 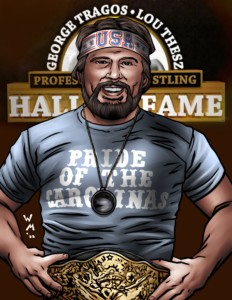 Don Kernodle was a formidable tag team wrestler in the Mid-Atlantic region, capturing three different championships on six separate occasions with six different partners, including Bob Orton Jr. and Ivan Koloff. An amateur wrestling standout and two-time arm wrestling champion, Kernodle took on Bob Roop in a “shoot” match to suitably impress his future trainers – they trained him at no cost after seeing his skills. Kernodle quickly developed a reputation as a solid hand in the ring and picked up wins across the southeast on his journey towards more important things. The Pride of the Carolinas took part in one of the most intense and famous feuds of the early 80s as his team battled for tag team gold and glory with the most popular babyface in the Mid-Atlantic. The culmination of this feud is recognized as a turning point for the promotion, and the final conflict led to even bigger and better things, including closed-circuit television broadcasts and eventually pay-per-view. Kernodle would find solo success in the Northeast and even capture a television championship in Toronto against set-mate Mike Rotunda. After his brief spell up north, Kernodle returned to his southern roots and once again had tag team glory with Ivan Koloff before a savage turn of events saw Kernodle taking on the hated Russian as the beloved babyface Pride of the USA.

Don Kernodle joins the TnT Hall of Fame set 3 and takes his place alongside the other legends of wrestling this July!