The 2021 Filsinger Games Holiday Releases are now available for Preorder!  You can order all of the newest game items right now HERE.

One of the most anticipated game editions of the season is the 12 card Legends Expansion Set VIII, which is themed around wrestlers known for their time in the Memphis wrestling scene.  One of the most prominent names from the area, and making his Filsinger Games debut in this set is Dutch Mantell! 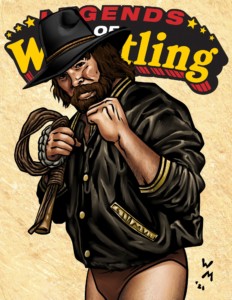 When Hank Snow sang the words to “I’ve Been Everywhere”, he may as well have been talking about Dutch Mantell. Dutch began his career in 1972, shortly after completing his service in Vietnam. A fixture in the south, many of Mantel’s career highlights came in the Memphis territory. Perhaps most notable was a babyface vs. babyface feud with the area’s most famous wrestler that saw Mantel come out on top and divide fans down the middle in their support for the two rivals. Armed with his trusty bullwhip, Shoo-Baby, Mantel held numerous titles in the territory, including tag gold with set-mates Bill Dundee and Austin Idol. Mantell would be no stranger to gold in his career as titles in Georgia, Kansas City, and Puerto Rico also found their way into his hands. Mantell’s work in Puerto Rico is legendary not only for his stints in the ring but also for his work behind the scenes. “Dirty” Dutch would go on to wrestle for both of the “big two” companies in the 90s and padded his resume with a run in Jim Cornette’s promotion as well as more work in Memphis. Perhaps one of Dutch’s most significant contributions to professional wrestling is shepherding new talent in the late 80s and early 90s. He worked with two of the biggest names of the era when they were just getting their respective starts and helped shape the trajectories of their careers. Dutch would have a memorable run with the worldwide brand in sports entertainment as a manager of talent, including the Indies line’s own Claudio Castagnoli. Wrestler, manager, booker, producer, author, and more, the original “Lone Wolf” is a more than worthy figure to add to any legends expansion but is especially the perfect fit for this Memphis-themed set.

Dutch Mantell joins the likes of Austin Idol, Bill Dundee, The Moondogs, the Fabulous Ones, Brickhouse Brown and others in Expansion Set VIII.  But that’s not all.  Game fans will also get the opportunity to purchase a special edition card for the voice of Memphis wrestling Lance Russell!

Champions of the Galaxy fans have the opportunity to get the 3rd main series set for FTR, the GWF’s developmental promotion.  FTR: Screwjobis a 10 card game edition and is the concluding chapter in the ongoing murder mystery story that has taken place in the COTG Prime cards in 2021.  Game fans that are missing the FTR COTG Prime cards and lead up story can purchase a FTR Prime Bonus Pack or a bundle featuring FTR 1&2 along with the Prime Bonus Pack and FTR: Screwjob.  Not only does this set wrap up the latest FTR storyline, but it also sets up the promotion for the future!

Indie fans also get a special treat with the release of Women of the Indies 2021: International Edition.  This set features 8 of the top women wrestlers in the world, all with vast experience globally, including Masha Slamovich, “Alpha Female” Jazzy Gabert and more.

Finally, we have a long awaited game item that fans of all product lines have been waiting for, the new Ringside Companion.  This massive spiral bound book will be the largest collection of charts and match rules ever released by Filsinger Games.  It will include matches found in real life the be used by Legends and Indies promoters, along with other worldly matches from the COTG universe.

Also, with this weekend being the biggest shopping weekend of the year, Filsinger Games is having a sale on numerous items when you used the Promo Code BLACKFRIDAY between now and Monday November 29th.  For more details on the sale go HERE.