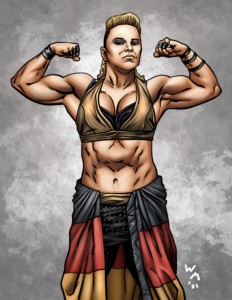 The Alpha Female. The World Wide Monster. Jazzy Gabert is coming to crush the competition in the Women of the Indies International Edition! Hailing from Germany, Jazzy began her career in 2001 and worked throughout Europe, gaining a reputation as one of the most fearsome competitors on the scene. Her size and style set her apart from most of the other women on the scene. Jazzy has held titles worldwide, including the prestigious World of Stardom championship in Japan and the Pro Wrestling EVE title in the UK. After a 16-year career dominating wherever she went, Jazzy made her way to the biggest company in the world and competed in their first-ever women’s tournament. She came up short in the first round against Kimber Lee but went on to work with the company’s UK brand against amazing competition like Kay Lee Ray, Xia Brookside, and Killer Kelly.

Jazzy, not content to keep her skills confined only to the squared circle, also distinguished herself in powerlifting, bodybuilding, and MMA.

A dominating presence in women’s wrestling, Jazzy Gabert is an incredible addition to the latest set. You can pre-order Women of the Indies International Edition, FTR: Screwjob, Legends of Wrestling Expansion VIII, and the mammoth Ringside Companion beginning Black Friday, November 26!