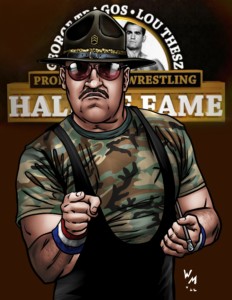 Sgt. Slaughter is the latest name announced for the Tragos-Thesz Hall of Fame Legends of Wrestling set! This legendary figure on the professional wrestling landscape is a 50-year veteran of the squared circle. Slaughter was everywhere in the 70s and 80s, wrestling for the top three promotions of the time. He made his mark in New York, challenging Bob Backlund for the top title and engaging in a legendary blood feud with another hall of fame caliber talent. Slaughter shifted gears to tag team action in the Mid-Atlantic region, where he and set-mate Don Kernodle formed a great tandem that held tag team gold and engaged in more legendary feuds with the top babyface team of the day. Finding himself back in New York, Slaughter would go from hated villain to defending the country’s honor against the Iron Sheik. Slaughter went mainstream with an appearance in the most popular cartoon and toyline of the day – something that may have resulted in his dismissal from the New York area. He wound up in Minneapolis, where he was again a top attraction. Eventually, Slaughter returned to the biggest promotion in the land and shocked everyone by turning on his country and siding with Iraq in the first Gulf War – a controversial angle, to say the least. But Slaughter found success, earning the top title in the company. Slaughter renounced his treacherous ways and began to wind down his in-ring career – trading it for the role of commissioner. Slaughter has maintained a presence behind the scenes and continues to be an incredible asset to the organizations paying tribute to the talent of yesteryear.

It’s a privilege to welcome Sgt. Slaughter to the LOW ranks in the TnT Hall of Fame Set 3 this July!