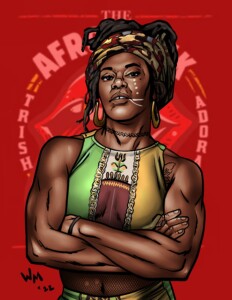 The Pan-Afrikan World Diaspora Champion, Trish Adora, is coming to the Best of the Women Indies 2022! Adora is a six-year pro having trained with Jonathan Gresham and The World Famous CB and under the tutelage of hall of famers. Adora has spent her time making a name for herself on the indie scene – so much so that she was featured in an article in the Washington Post that called her a “…superhero for a new generation of wrestling fans…” It was a well-deserved title for this Army vet. After six years of active duty with the military, Adora turned her attention toward the squared circle and honed her skills into a world-class talent. Adora is one of the most exceptional talents working on the indie scene today. Her technical and submission skills are nearly non-pareil, but ever the well-rounded competitor her smashmouth Lariat Tubman has put down many an opponent along with her cattle mutilation hold. Adora has squared up against talents like Mercedes Martinez, Miranda Alize, and Edith Surreal, and intergender competition like AC Mack and Warhorse. How far can the Afro-Punk go? Around the world and back.