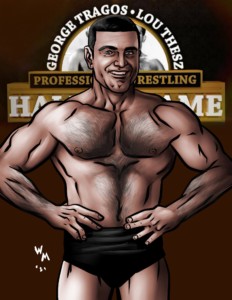 An amateur wrestling standout from the University of Buffalo, Don Curtis transitioned from wrestling captain to pro in 1951 after a workout with Lou Thesz. His early career was spent in Canada, New Zealand, and Australia, to name a few locales, but the close of the decade brought him to the territory where he would arguably see the most success: Florida. A favored competitor of the promoter, Curtis saw multiple reigns as a tag team champion with different partners for the next decade. Not restricted to only the Florida territory, of course, Curtis also saw tag team success in Georgia and the Northeast.

A true legend of the Golden Era of professional wrestling, Don Curtis, comes to promoters as the next official name announced for the Tragos/Thesz Professional Wrestling Hall of Fame Set II drops in July. Pre-orders for this set and Origins 2137 will go live later this month!