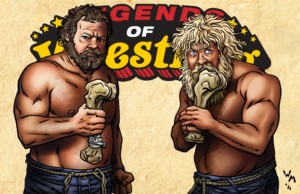 Rex and Spot, the Moondogs, are coming to the Legends of Wrestling Expansion VIII! Wild and wooly with shredded jeans and clutching chewed-up bones, the Moondogs were known for their wild and bloody brawling style. They often found themselves at odds with pretty boy babyface teams, and the contrast in looks and styles brought the fans into the stands in droves.

The Moondogs got their start as a team in the preeminent promotion of the Northeast. Managed by Lou Albano, Rex and Spot held that company’s Tag Team Championship before drifting down south into a fabulous rivalry where they once again captured tag team gold. Though their first stint in Memphis lasted only about a year, their impact reverberated, and they made their return in 1991. Upon their comeback, they became embroiled in one of the hottest feuds of the territory, something they had a knack for wherever they showed up.

The Moondogs are howling tonight! Joining the previously announced Austin Idol, Bill Dundee, and Brickhouse Brown, the Moondogs are a more than worthy addition to this Memphis-themed expansion. You can pre-order the new set along with FTR 3 and the Women of the Indies International Edition on Black Friday November 26th!