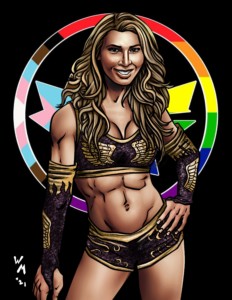 The Filipino-born Gisele Shaw is the latest addition to the Women of the Indies International Edition. Trained by one of Canada’s impact players, Shaw has been tearing up the UK indie scene and capturing titles. Shaw also ranked in the Top 20 of the PWI Women’s 150 in 2021. The self-styled Quintessential Diva looks the part but can also back it up in the ring and recently had an incredible series of matches with set-mate Hyan. Shaw has also participated in the SHE-1, the premier women’s wrestling tournament in the UK. Shaw credits her recent ascent to an attitude shift – she used to play nice, but now she’s taking what she wants – what she’s earned.

This December, Gisele Shaw joins Masha Slamovich, Hyan, and Jody Threat in the Women of the Indies International Edition. Pre-orders begin Black Friday for the Women of Indies, Legends of Wrestling Expansion VIII, and FTR 3!