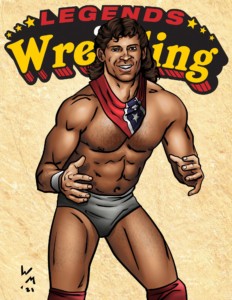 Trained by set-mate Steve Keirn, Tracy Smothers started in Memphis in the mid-80s. Used chiefly as enhancement talent on Saturday mornings, Smothers learned you have to go away to come back, and that’s just what he did. A journeyman, if ever there was one, Smothers worked the Mid South and Florida territories but always seems to find his way back to Memphis. He was much more successful during his second stint and won an NWA Mid-America Heavyweight Championship tournament. At one point, Smothers even wrestled a bear! Smothers began collecting titles throughout the South in singles and tag team competitions. He gained more visibility competing for one of the big two promotions in the early 90s before heading north and competing for the other. Smothers also spent time in Jim Cornette’s throwback promotion, where he saw great success and held all of their major titles. Smothers continued working anywhere and everywhere, seeing stints in Japan, back to New York, and a memorable run in the Philadelphia-based number 3 promotion. Eventually, Smothers made his way to the burgeoning indie scene, where he may have made his most important and lasting contribution to the business by shepherding new talent and imparting his decades of knowledge to the next generation. Sadly, Tracy Smother paced away due to complications from lymphoma in October of 2020. Many of the names he’d worked with on the indie scene fondly remembered their time with him and paid tribute to the wisdom imparted by the Wild-Eyed Southern Boy.